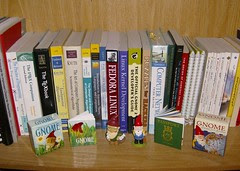 Now figure out what time it is...

Tuesday, January 30, 2007
N800 So I was one the lucky ones to get a N800 developer discount code too. Thanks you! You know who you are. Seems like I'll be the last to get it though. The US store only accepts US addresses (even for billing). So I gave the code to a friend of mine to do the ordering, and she's had some "invalid code" problems so far. But customer service has been very nice to her and it seems to be sorting out.

Incidentally (?) I actually found some time this past weekend and updated my N770 to the 2006 image, and then updated my olpc laptop too, and have got some interesting stuff going on here right now. We'll see how this goes.

Chris Blizzard is *the* catalyst Luis, you are totally on spot. Chris Blizzard totally rocks, and is the catalyst. He was the one who initially asked me why I don't join Red Hat too.

Wednesday, January 17, 2007
New Vte Developer An awesome Chris Wilson committed more than 20 patches to vte today minutes after I created his SVN account. With this pace, he'll be our brand new vte maintainer before GNOME 2.18 is out.

Just check this bug out.

Monday, January 08, 2007
Spell-checking gtk-docs Motivated by Andrew Cowie's Spell-checking Java source code, I decided to give it a try on Pango. So I ended up spell-checking Pango's and cairo's documentation, fixing more than 100 typos in Pango's, and some 40 in cairo. Not bad for a three hour work.

Unlike Andrew, I didn't directly spell-check source code. What would have been too intrusive. Instead, I extracted gtk-doc blocks (and other block comments) out of source code:

Then spell-checked docs, and finally diffed docs.bak and docs and went over the changes, applying them to source code manually. For the sgml template files it was easier, just spell-checked the files directly.

The idea is to use "Add to list" as few times as possible. For example, Pango API has lots of parameter names "ink_rect" and "logical_rect". But instead of adding "rect" to the spell-check dictionary, I preferred "Ignor"ing everytime it nagged about the "rect" in "ink_rect", but it did help catch a couple places that "rect" was used in a sentence. And I replaced those with "rectangle".