My reasoning was that the current code is not worth changing without strong profiling data showing measurable gain in real-world use cases. That's all.

Now to your solution and questions. You approach has two and a half major issues that make it unusable in real code:So while it theoretically works, using nine integer operations, in practice it's unusable. Oh, your function produces the exact same values as in the glib table BTW. That's good.

Here is my solution that can be written as valid C code using 13 simple 32-bit operations:It's basically a negation followed by a log2 straight from bithacks, followed by a table lookup. I particularly like the beautiful final constant.

I leave it to others to measure if this is faster than the lookup-table in glib. Enjoyed working this out though. Everyone, go crazy, shove a few ops off!


While at that, also check out What’s Going On With Red Hat Desktop Systems? An Update.

The list in there just doesn't do justice on how important a role Red Hat's Desktop team plays in advancement of the Free Software desktop and laptop experience. With recent hires like Matthew Garrett, Richard Hughes, and William Jon McCann, you know how serious we are about doing the Right Thing. I feel so privileged to be part of that. 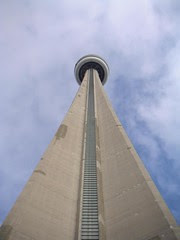 [While people are in the fundraising/donation mood...]

On Saturday I will climb the tallest free-standing structure on land in the world as part of the 18th Annual Canada Life CN Tower Climb for WWF-Canada.

I will be climbing 1776 step in my TEAM GNOME tshirt, aiming for 25 minutes, and with a goal of raising $250 by tomorrow (Friday 18th) night, to help stop global warming.

So here is your chance to help save the world and enjoy while I'm suffering. Sponsor me now!

Aaron is Luis You guys are all certainly wrong.

Aaron is the real Luis, and he loves Vincent:

Wednesday, April 16, 2008
History meme Liked this one enough to bother.

Where ll is the Red Hat / Fedora alias for ls -l, and makenull is my alias for make >/dev/null.