McEs, A Hacker Life
Saturday, June 25, 2005
More Google Summer of Code WOOT. I was still in shock over the election results.

We are delighted to tell you that your project (attached) has been
selected to receive a grant in Google's Summer of Code program.

To receive the first installment of your grant, you'll need to review
and agree to the terms of the attached agreement, and fax it back to
us. If you have any questions, please don.t hesitate to contact us at
code@google.com, and we'll be glad to help.

Tuesday, June 21, 2005
Work, work, work Sometimes I forget that I'm supposed to blog my work :).
One final cool thing. wasabi dropped us the link to a lemmings entirely done in DHTML, with all the graphics and stuff!

Update: In the spare time, if any, I try to write a thesis! 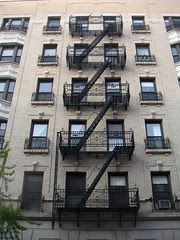 Stairs
Uploaded by Behdad Esfahbod.
Like Nat, I started running a few weeks ago as a way to leave the pack finally behind. I do not buy cigarettes anymore, but may smoke socially. On the running side, not to be compared to Nat, I run 5.5 miles in 50 minutes, on a treadmill. It helps a lot with keeping your heart rate at target, but one should be too depressed and bored to run more than an hour on a treadmill. If you happen to be in Downtown Toronto and run outside, lemme know. I don't like running in Queen's Park though.

That helps with losing the beer belly too. I do not drink that much these days either. Almost never drink alone, and perhaps a couple shots Tequila or Rum in the weekends. I expect some of my friends in Iran to drink more than I do here in Canada.

Friday, June 17, 2005
Google Summer of Code again A few days back when Roozbeh was making a buzz about Google SoC's ineligibility for citizens from the countries on the US State Department list of state sponsors of terrorism, he asked me to blog my opinion about the issue. I told him on IRC that nobody's going to check nobody's passport/citizenship. It's simply something wrong the lawyers have written, that's all.

It was so obvious to Roozbeh that I'm going to apply. I didn't initially, mainly with "I am already an Open Source developer. The bounties are to attract new students..." line of thinking..., but later on financial pressures (hint, hint, board members ;) convinced me to send in a few proposals.

Anyway, in the course of sending in proposals, I found myself reading the SoC mailing list, and to figured out Chris DiBona is behind the whole thing, and he's being absolutely friendly and responsive with the 6000+ applicants, on the mailing list, off the list, or IRC. So I simply sent him a note with a link to Roozbeh's posts. He sent an almost canned reply in a few hours, he didn't get what we mean first. In a couple of minutes he replied again that he didn't noteice that "Roozbeh is in the States", and that the FAQ is likely incorrect (and he needs to asks lawyers), and asked me to let Roozbeh know that they are cool with that. Later on replied again to my reply with Roozbeh CCed, and was curious why Roozbeh didn't sent him a note in the first place...

Anyway, that's the good ending. But leaves me wondering, why didn't Roozbeh sent him an email in the first place? In other words, what's the point in blogging such a controversial issue ("Google Summer of Code is a piece of shit", it's racism, ...)? Specially when your blog is hooked to a big planet, which is itself mirrored a zillion times? It gets to everybody's ears except for those that are in charge. What about Roozbeh's Fedora EULA concerns? What would have he got as a reply should he have had contacted Red Hat in the first place? These all remind me of the greater act of Iranians online these days: Openning online petitions, every couple of months, that may reach all the world but not the people in charge in the government of Iran, or blogging whatever problems or suggestions they have for anybody, and expect them to pick it up. There's a communication problem here, I don't know why.

Today (Friday) is the Iranian presidential election (it's midday in Iran right now), and I'm going to write in my Persian blog why I do not vote. I'm leaving for Ottawa in a few hours to company my friends voting though.

And another photo. Blogging from flickr is damn convenient. But I'll stop, promise.

Another Tuxi wine bottle, with my laptop in the background.

Why Epiphany? hub: I second you that the tabs bug in Epiphany is quite annoying, but I like Epiphany more, because here in 2005, browsers still crash, once a week maybe, but they do. And I hate losing all my open tabs. That's why Epiphany has a crash recovery that "Just Works." I'm sure there are extensions for Firefox that do that, but following the GNOME philosophy, I'm really busier with my stuff than going finding extensions for my web browsers to make it just work. The crash recovery is pretty handy even if browsers do not crash. When I'm running out of office, I lock my screen, and I know that if I come back tomorrow I see my session killed, but that really doesn't matter anymore, Epiphany keeps track of where I was.

There's another reason that I like Epiphany, it has better Persian support, thanks to Pango and Gtk+. Namely, it handles right-to-left tooltips pretty nice.

Tuesday, June 14, 2005
Extremely Pink Floydish year Many Pink Floyd fans were faced with mixed feelings when two Roger Waters singles Too Kill the Child / Leaving Beirut were release for digital download just before the US presidential election. IMHO Leaving Beirut lyrics are awesome, the very high level you expect from Waters, but Too Kill the Child is too bound a certain period in history, George Bush namely, but that's not new for Waters, he didn't have any problem calling Margaret Thatcher (Maggie) either. Anyway, the singles were filling the whole roger-waters.com for a few months last year.

I was finishing a Pink Floyd compilation work, so I checked roger-waters.com again a couple weeks ago, just to find out the long-promised opera Ça Ira is ready to release. To be in stores on September 27. What a perfect gift to be released on my birthday! But I do not need more than one copy anyway. Got to set up a mechanism to help my friends choose items from my wish list exclusively!

That alone could have been enough Floydian news for the year of 2005, but if you have been hoping deep in there that they reunite, here we go!

As everybody knows by now (I'm not a news site, sorry), Live 8 is around the corner. Another Live Aid you may call it. But hey, the London show is featuring Roger Waters performing with the rest of Pink Floyd for the first time in 25 years! The Wall has been by all means the last work of them as a band. Lo and behold, who's organizing the whole Live 8 thing? Nobody other than Bob Geldof, adult Pink in Pink Floyd The Wall movie by Alan Parker. Coincidence, eh?

jdub: behdad: the thing is, once i started, i couldn't stop.

Jeff's rocking fast. No need to send me your IRC nick anymore. :)

Readjusting Mirrors Redux Garrett: That way of readjusting mirrors is not new. It's in the official driver's handbook of Ontario. To quote:

IRC nicks on p.g.o It would be quite helpful to some of us with an imperfect memory and knowledge if everybody have had their IRC nick on p.g.o, like the non-Latin names have right now (me, roozbeh, svu, danilo). If you would like to see your nick added, please drop me a note at yournick at behdad org ;) with your name, and I'll compile a list and send to jdub. I can compile a list myself, but prefer to leave it to individual people to decide for themselves. Thanks. We appreciate your business.

Planet, Blogger, and b.g.o Seems like there's a problem in Planet fetching Blogger blogs too frequently and Blogger redirecting to a "sorry" page... This caused some problems last month. Jdub was nice enough to fix it a couple times. Seems like it works now. I'm moving to b.g.o as a long-term solution. For those who really miss my rants, May archives are here. Repeating a couple of lines: "With the reopening of the Imam Khomeini airport in Tehran, finally the Iranian government decided to issue one-week visas to transit passengers in the airport. The details will be worked out soon. Good news for traveling monkeys that like Lebanon I guess."

On the new p.g.o look, that's awesome, thanks Steven. Small thing that I don't like is how post headers and footers are hyperlinked line-wide, so their text gets underlined when the mouse is passing over the empty space in the line, which is quite distracting IMHO.

Saturday, June 04, 2005
Windows 98 style permissions I got a message from a friend about problem with the Fedora Core on his laptop that I have had installed. Seems like he has had switched to using FC3 continously for a week or so. Apparently he wanted to give permission to "root" group to be able to write in all files and directories, the same as "root" user. So he ran the commands:

And it was after he started getting tons of error messages that I was notified. Reminded me of an old Unix word of wisdom I had heard, saying that one of the worst thing you can do to a Unix hacker you have got root access thing is to do chmod -R a+rwx /. And I thought to myself, that's indeed what Windows 98 family of products look like...

Wednesday, June 01, 2005
J.D. Salinger An old friend pointe me to an extensive collection of Salinger's works. AFAICS all works are copyrighted still, so, use at your own risk, you are warned.