Today I tried to port my fixes from dasher gnome-2-12 branch to HEAD. I thought I can start with making a diff of the branch and read through it to see what should be done on HEAD, since HEAD has got a lot of reorganization. The 34MB patch is more than 350,000 lines not including the translations... Damn.

Good and Bad "Wow" numbers in blizzard's recent profiling startup time post. Much more interesting is the Stress Analysis of a Software Project [long] he links to. As good a read as the Feynman report even. And the analogy is so true. Where are we heading guys?

Was leaving home this morning when I figured I've lost my wallet, since it's not in the office either. Have got to go back home and make sure I've really lost it. A bunch of valuable digits inside that I'm not going to elaborate here, should you be reading, yes you! Sunday, January 22, 2006
T-shirts As counterproductive as my weekend has been so far, I love the tees I have received this christmas season while I was away:
and last but not least:
Not a bad start for the year...

Release your MAINTAINERS Another thing that all GNOME maintainers may want to check is that their modules have the MAINTAINERS file, AND that this file is included in top Makefile.am's EXTRA_DIST variable.

What is a MAINTAINERS file good for if it doesn't go into the tarball anyway? The catch is that for files like README, NEWS, AUTHORS, TODO, and a few more, automake automatically includes them in the release, but for MAINTAINERS, it's up to you to add it. Same for HACKING, if you happen to have it.

/me can earn another bugzilla point by reporting "Release your MAINTAINERS" for all affected modules...

Saturday, January 21, 2006
Planet GNOME Logo Based on something I've had in mind for a while: 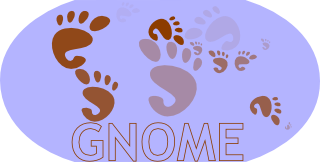 Update: In navy and white theme: 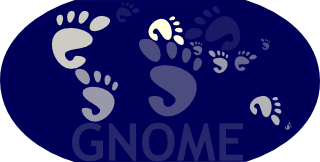 SVG version. Feel free to get the SVG and edit the colors, whatever.

Update 2: Replaced the SVG files with hand-written ones, so you can change the colors by tweaking a couple entities at the top.

Please check .desktop files for your modules if you did not get a bug reported, and make sure it does have a Categories: line that starts with GNOME;GTK;.

Home, Sweet Home First I missed meeting with Reinout, he couldn't find me. Then I had the worst flight ever, with exteremely rude and unhelpful flight assitants. It was a KLM flight FYI. Then a bit of in-depth experience with Customs Canada, like investigating all my luggage. Anyway, I'm finally back home again. Unpacked luggage, loaded the laundry and went to sleep...

Seems like kris and todd have taken on the planet together. Nothing to read there. Cute!

In other news, Mehrdad failed to buy David Gilmour tickets for us. Apparently they sold out within a minute. Too bad :(

Friday, January 20, 2006
Leaving Tehran, Take 2: Amsterdam Again Ok, so I'm in Amsterdam airport again, for about 7 more hours... If you like to drop by for a coffee or other drinks, send me a quick email and we'll see.

Thursday, January 19, 2006
Leaving Tehran, Take 1 So I went to the Mehrabad airport last night to get back home, but fortunately the flight was canceled and postponed 24 hours. I took the time and went up skiing today. Much fun, even if we skied for an hour. Will try going back home again tonight.

How does it feel? With no direction home? :-D

Kaveh Leaving Tomorrow Kaveh (a.k.a Hapali) is leaving Toronto for California. Worse is that I'm away. He was the best guy in all GTA to hang out and have food or drinks with. He will be greatly missed among Torontonian friends...

Monday, January 09, 2006
Dead laptop Everybody known that laptops have a higher tendency to die while in vacations or otherwise away from normal life. Well, so did mine.

Last year on the day of the Iranian new year, the backlight of my lovely huge heavy Vaio laptop died. I ordered the cheapest backlight found on eBay and managed to dismantle the LCD and replace it successfully. Being the cheapest brand, it went red in just a few months, so I've been using external monitors for the past four months, until I got a new backlight, not the cheapest one this time... So I arranged for somebody to bring it to Iran after it didn't arrive in time for my own travel, and picked it up too.

While too busy to sit down and change the backlight for a few days, the laptop also started hanging when moved, to the extent that the slightest physical motion would hang it in a second. So it was time to repair...

Now I have opened it a few times, and changed backlight once, so it was not any hard, just a matter of a few hours of (un)screwing. But this time was different. After putting everything back, it's not functioning at all. No slightest sign of having electricity running into it's wires. I suspect I fcuked up the ribbons connecting the panel with the power button to the main, but I changed the ribbons around, no luck...

Anyway, the laptop is left with a laptop repair company now and I'm back to work using my hard disk on a friend's laptop. Isn't that cool that my Fedora runs on a Dell quite as good as it used to run on the Vaio? Can you do that with the other operating system? (-;

Tuesday, January 03, 2006
In the News An Evening with Jeff Waugh (Linux Journal) by fellow TLUGer Colin McGregor, about jdub's talk in Toronto that I hosted.

Sunday, January 01, 2006
Happy New Year Tomorrow everybody's going back to normal life again, while I start the second half of my 5-week-long vacation back home... Unfortunately I gave away my tiny camera, so no photos at all so far, but I could write a long story about every night of my stay.

Seems like a couple GNOMErs have filled up the planet, so I've missed reading a few entries from the past few days.